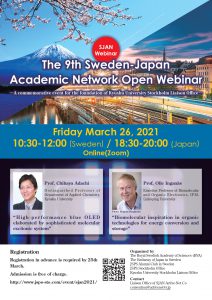 Registration in advance is required by March 25 >> here

“Biomolecular inspiration in organic technologies for energy conversion and storage”

Adachi’s research combines the areas of chemistry, physics, and electronics to advance the field of organic light‐emitting materials and devices from both the materials and device perspectives through the design of new molecules with novel properties, the study of processes occurring in individual materials and complete devices, and the exploration of new device structures, and he has co‐authored over 600 research papers.

He co‐founded and serves as scientific advisor for Kyulux Inc, which is commercializing OLED emitters based on thermally activated delayed fluorescence. In 2019, he co‐founded KOALA Tech Inc to further develop and eventually commercialize organic laser diodes. He received a Thomson Reuters Research Front Award in 2016 followed by the Nishina Memorial Prize in 2017. More recently, he has been selected as a Highly Cited Researcher for the period of 2018–2020 and was awarded a 2019 Nagoya Silver Medal.

Olle Inganäs is emeritus professor of biomolecular and organic electronics, IFM, Linköpings Universitet, Sweden.
He received a MSc in engineering physics from Chalmers University of Technology (1977), a BSc in philosophy and economics from Göteborg University (1978), and a PhD in applied physics at Linköping University in 1984. He was appointed professor in 1999.

Inganäs has focused on studies of the class of conjugated polymers throughout areas of polymer physics, electrochemistry, electronics and optics. He has contributed to a number of startup companies in the field of electronic polymers. His current interest include energy conversion and energy storage with organic photovoltaic devices and organic supercabatteries, as well as the use of biopolymers as organisers of electronic polymers.  His publications(>585) and citations(>44,000) with Hirsch index 107, has also given the Web of Science ranking as Highly Cited Scientist 2014-2020.